Websploit is a tool that is used to directory Scanner and files on a web server. It is designed to allow users to discover and enumerate files and directories that may be accessible on a web server, but are not intended to be publicly accessible. This can be useful for identifying potential vulnerabilities or for finding sensitive information that may be stored on the server. Websploit is typically used by security professionals or hackers to identify and exploit weaknesses in a web server or website. It is important to note that using Websploit or any other tool to scan or access directories or files on a web server without permission is generally considered unethical and may be illegal in some jurisdictions.

In the next few tutorials I will explain how to use the different Websploit modules. WebSploit is an open source project for web application assessments. In this tutorial we will be using the websploit directory scanner module and we will add some custom directories. Websploit directory scanner is a script which scans webservers for directories listed in the script and tells you they exist or not.

Due to many errors generated by the script, mostly 400 Bad Request errors on existing directories, I have edited the script. the issues causing the 400 Bad Request errors have been fixed now. I’ve also added a verbosity option so you can choose whether you just want to see existing directories or errors too. Code 302 Found is coloured green now instead of yellow. The new script can be downloaded here (save as):

Replace the script in the following directory in Kali Linux:

To use the Websploit Directory Scanner to scan directories on a web server, you will need to have Websploit installed on your computer and be connected to the internet.

It is important to note that Websploit is only intended for use on systems that you have permission to scan. Using Websploit or any other tool to scan or access directories or files on a web server without permission is generally considered unethical and may be illegal in some jurisdictions.

Let’s open a terminal and start Websploit with the following command: 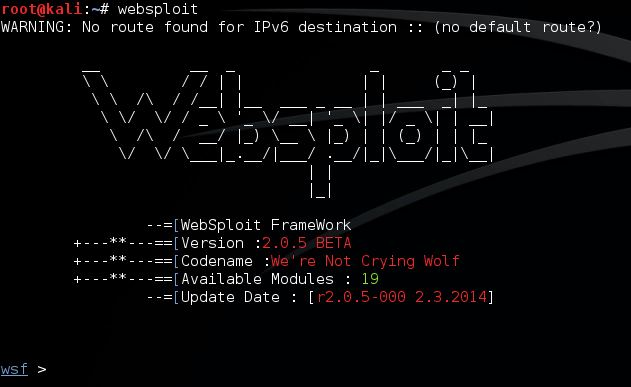 Use the following command to view the list of available Websploit modules: 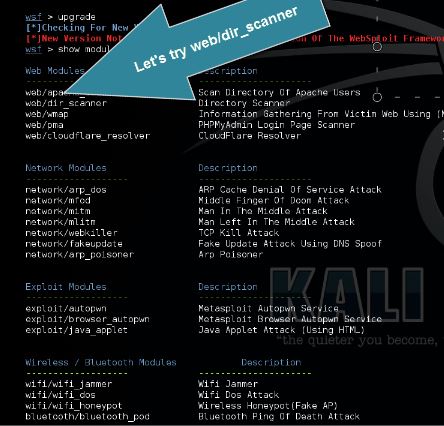 Use the following command to show available options for the used module:

Use the following command to set the target:

And the following command to set the verbosity level:

Now type Run to run the module against the selected target: 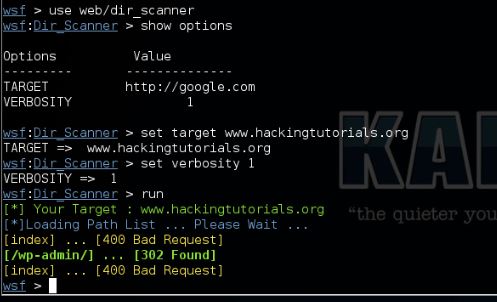 Add your directories to the following lines:

Make sure you use this format: ‘/wp-admin/’,