Becoming an ethical hacker is not as easy as becoming a software developer or programmer. Ethical hacker a.k.a penetration tester should have a good understanding of various fields. The lack of an in-depth programming language only in C, C ++, Python, PHP, etc. is a necessary Linux / Unix environment knowledge to get started in the area of ​​ethical hacking only.

Kali Linux includes about 600 tools, which comes with a ton of pre-installed penetration testing tools. As an early penetration tester, this sounds terrible. How can one learn or use all those tools as a beginner? The truth is, you don’t have to master all of them, in fact, there are many tools built into Linux that have the same concept and purpose. But, of them, there are always the best. In this article I will cover the top 25 best Kali Linux tools for beginner penetration testers. But if you have just installed Kali Linux before reading it further, i recommend you read here it is a good jump start into Kali.

The top 25 best Kali Linux tools I listed below, are based on functionality and also, its sequence in the Penetration Testing Cycle or procedure. If you have already followed along my earlier article in the Penetration Testing Cycle section, there are basically four procedures: Reconnaissance, Scanning, Exploitation and Post-Exploitation. Here I listed bottom to top best 25 Kali Linux tools, starting from Anonymity.

During penetration testing, it is crucial to prepare to stay anonymous. Don’t fool yourself by revealing your own identity while hacking, cover it!

For example, i use my WLAN1 device to connect to the network, to change the default WLAN1 MAC address fully random, i type the command:

Proxychains cover and handle whatever job. Add command “proxychains” for every job, that means we enable Proxychains service. For example i want to trigger ProxyChain to cover NMAP. The command is:

But, before you use ProxyChains, you need to configure it first, adding proxy IP and other things, see full tutorial about ProxyChains here: https://www.itjd.in/proxychains-tutorial/

Traceroute is a computer network diagnostic tool for displaying the connection route and measuring transit delays of packets across an IP network.

WHOIS is a database managed by local internet registrars, it is a query and response protocol that is widely used for querying databases that store the registered users of an Internet resource, such as a domain name or an IP address block, but is also used for a wider range of other personal information about the domain owner. 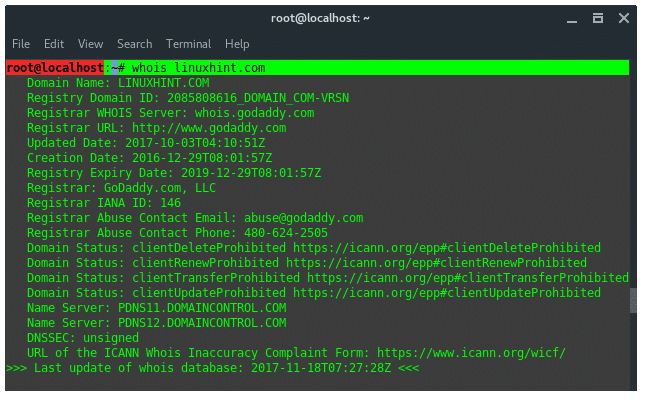 Maltegoce is an intelligence gathering tool which aims to discover and collect data about the target (company or personal) and visualizes that collected data into graph for analysis. Before we are using maltegoce, first register an maltego community edition here : https://www.paterva.com/web7/community/community.php

Once your done registering, now open the terminal and type “maltegoce”. wait a brief moment for it to startup. After it finishes loading, you will be greeted by a screen asking you to login to Maltego Community Edition. 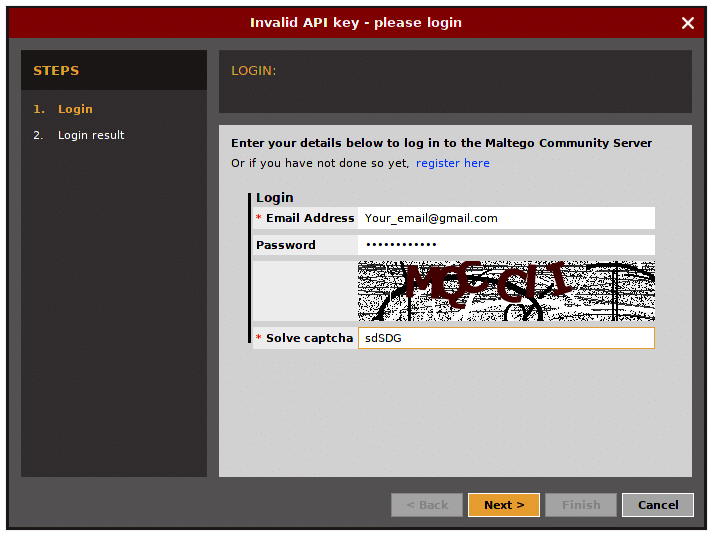 Sign in with the account you’ve just registered. After you are logged in you need to decide what type of “machine” is needed to run against the target. 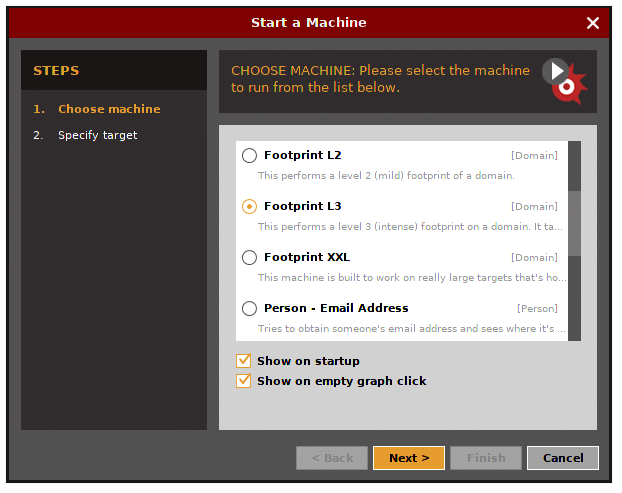 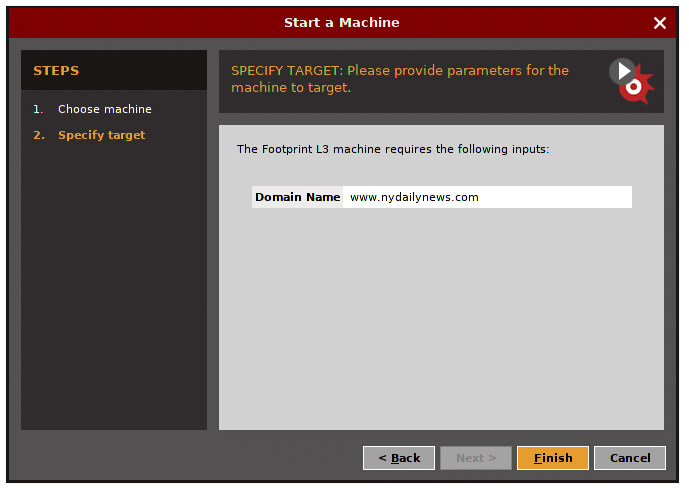 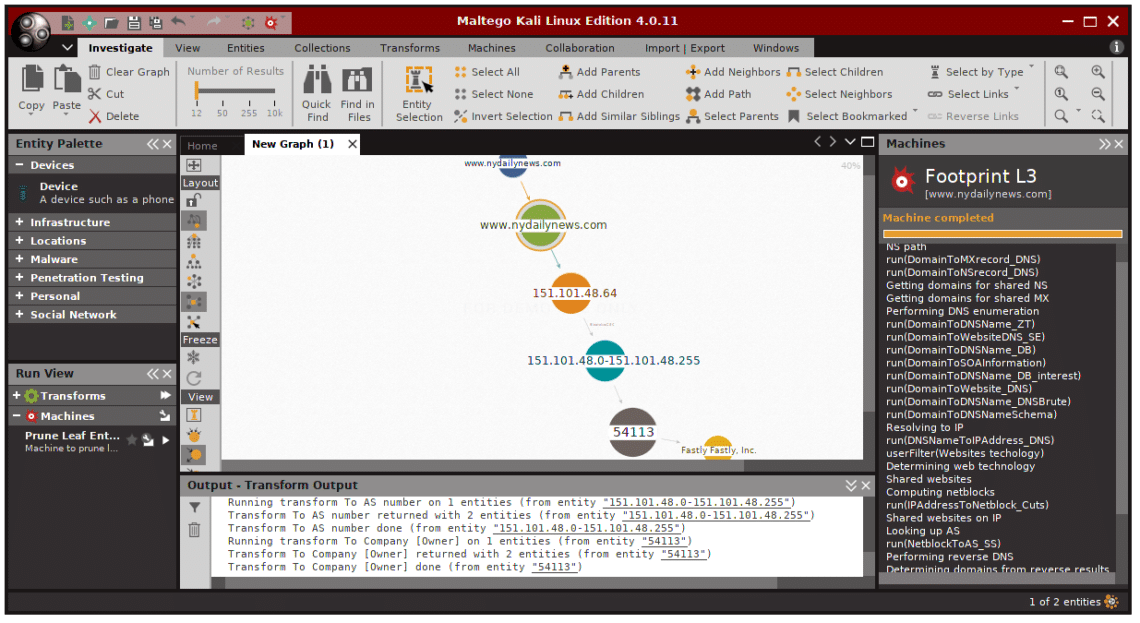 The result should look like that, it display whatever found, and visualize it in graph.

Network Mapper (NMap) is a tool used for network discovery and security auditing. My favorite option in NMAP is “–script vuln” it tells NMAP to audit the security of each open port on target using NSE. For example:

To view full list of NMAP features, see the help page instead. 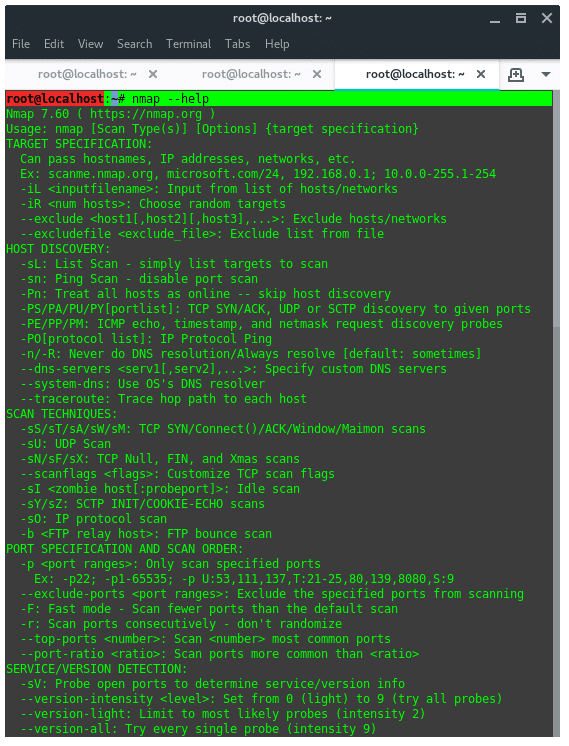 Dirb is a tool to find hidden objects, files and directories on a website. Dirb works by launching a dictionary based attack against a web server and analyzing the response. DIRB comes with a set of preconfigured wordlists, located under /usr/share/dirb/wordlists/. To launch dirb, use the following command pattern: 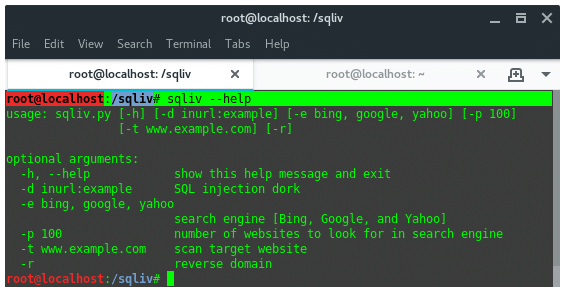 SQLiv is a simple and massive SQL injection vulnerability scanner. SQLiv is not installed by default in Kali Linux. To install it, run the following commands:

Once installed, just type in the terminal:

Burp Suite is a  collection of tools bundled into a single suite which performs security testing of web applications, from initial mapping and analysis of an application’s attack surface, through to finding and exploiting security vulnerabilities. The main features of Burpsuite is that it can function as an intercepting proxy (see image below). Burpsuite intercepts the traffic between a web browser and the web server.

To open burpsuite, type “burpsuite” into the terminal. 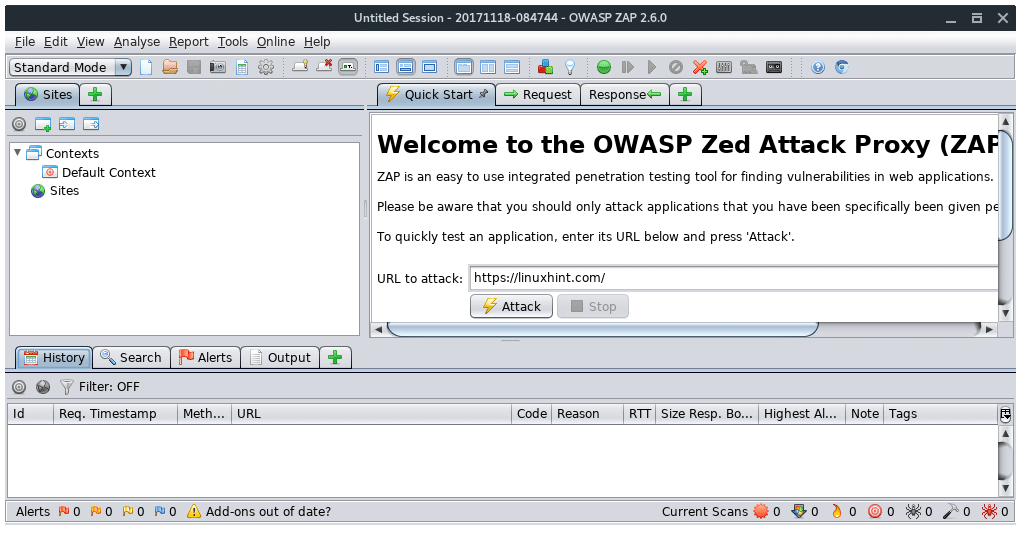 OWASP ZAP is a Java-based tool for testing web app security. It has an intuitive GUI and powerful features to do such things as fuzzing, scripting, spidering, proxying and attacking web apps. It is also extensible through a number of plugins. In this way, it is an all-in-one web app testing tool.

To open OWASP ZAP, type “owasp-zap” into the terminal.

Httrack is a website / webpage cloner, from a penetration testing perspective, it is mainly used to create a fake website, or phising in attacker server. Run httrack wizard by typing in the terminal :

You will be prompted, some configuration needed with guidance. Such as, Project name, Base path of the project, set the  URL target and the proxy configuration. 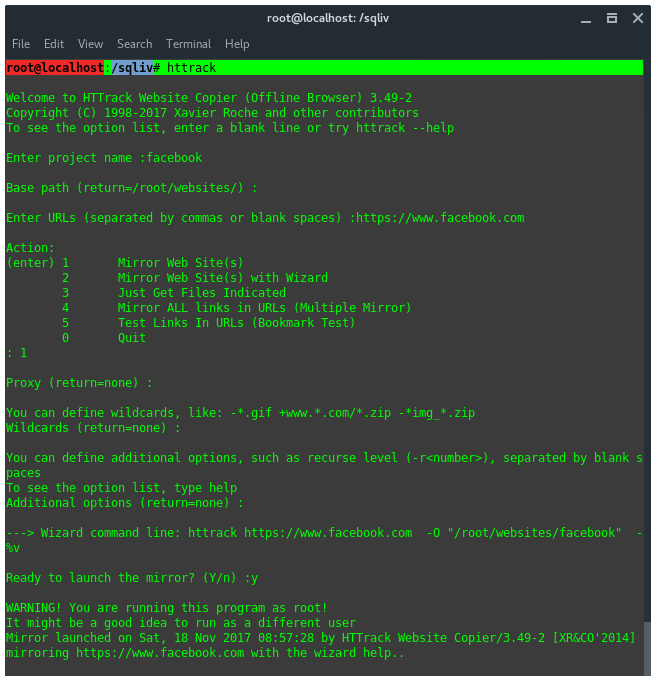 JoomScan is a Web application analysis tool to scan and analyze Joomla CMS, while WPScan is a WordPress CMS vulnerability scanner. To check what CMS is installed on a target website, you can use either ONLINE CMS Scanner, or using additional tools, “CMSMap”. (https://github.com/Dionach/CMSmap). Once you know the target CMS, whether it is Joomla or WordPress, then you can decide to  use JoomsScan or WPScan.
Run JoomScan: 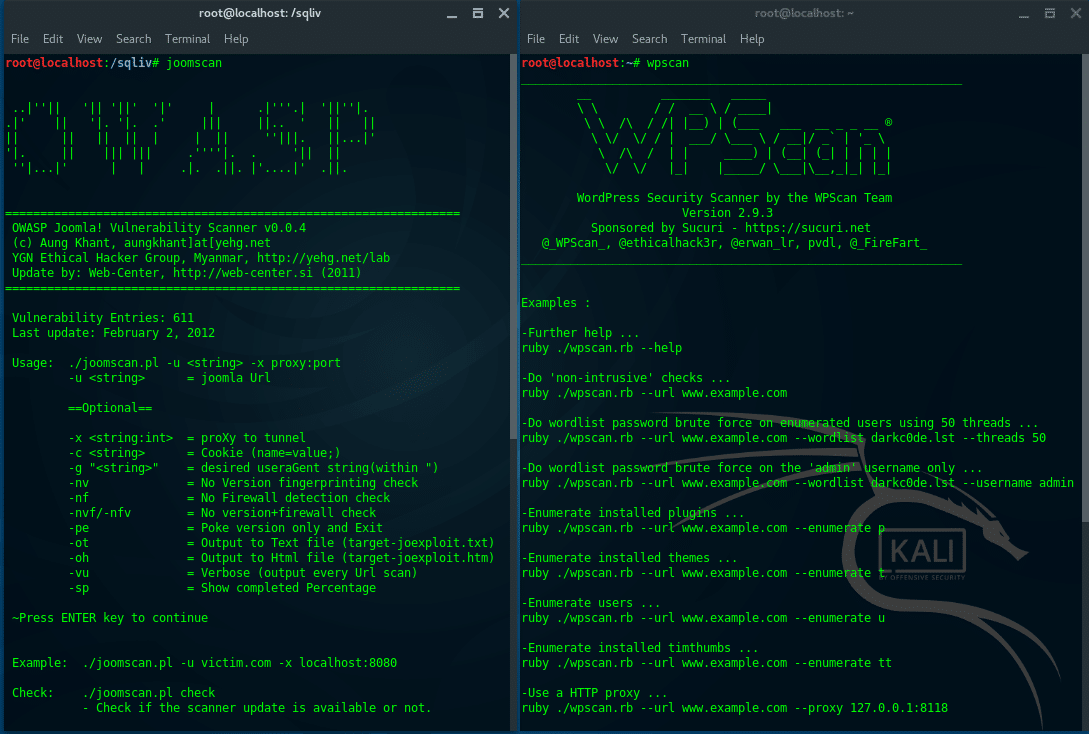 For example, let’s say we have vulnerable SQL injection, it is http://www.vulnsite.com/products/shop.php?id=13. And we’ve already acquired the databases, tables and columns. If we want to acquire the data, then the command is:

Mostly, the data is encrypted, we need another tool to decrypt it. Below is another procedure to get the clear text password.

Hash-identifier is a tool to identify the different types of hashes used to encrypt data and especially passwords. Findmyhash is a tool to crack encrypted passwords or data using online services. For example we got encrypted data:  098f6bcd4621d373cade4e832627b4f6. First thing you are going to need to do is identify the hash type. To do that, launch “hash-identifier” in terminal, and input the hash value on it. 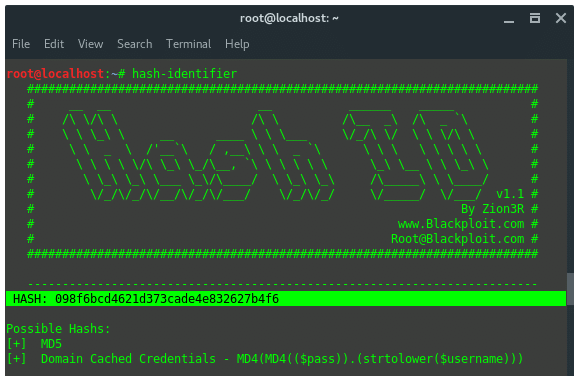 Hash-identifier detected this decrypted data is using hash algorithm MD5. After its hash type is known, then we use another tool, findmyhash to crack the data. Now, type in the terminal: 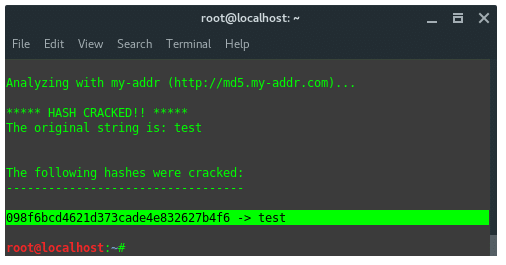 Crunch is a utility to create custom wordlists, where you can specify a standard character set or a character set you specify. crunch can generate all possible combinations and permutations.

Now, let’s go over what’s included in the syntax above.

John The Ripper is one of the most popular password testing and cracking programs as it combines a number of password crackers into one package, auto-detects password hash types, and includes a customization cracker. In Linux, “passwd” file located at /etc/passwd contains all user information. hash SHA encrypted password of each of the users found is stored in /etc/shadow file. 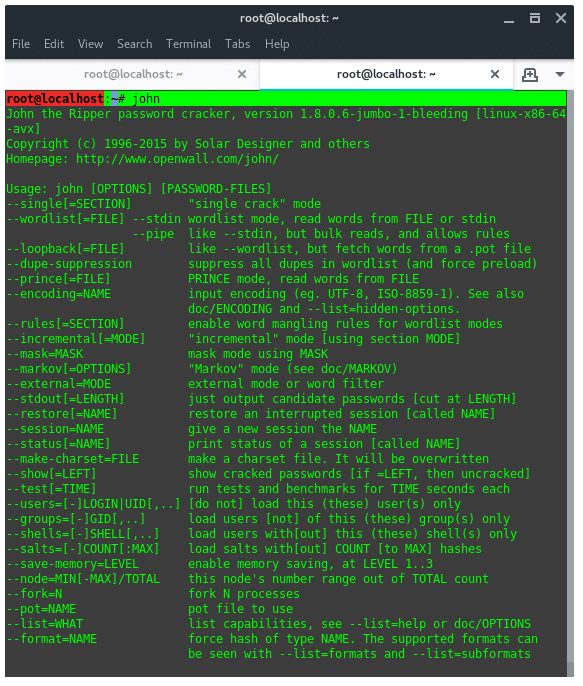 Fluxion is my favorite Evil Twin Attack tool. fluxion doesn’t perform bruteforce attack to break the key. Fluxion creates a open twin AP of the target (Wi-Fi) network. When someone tries to connect to that network a fake authentication page pops up asking for key. When victim enters the key, fluxion captures that key and checks whether the key is a valid password by matching the key and the handshake. To install Fluxion, run the following commands:

Open the fluxion wizard by typing:

When first run, fluxion does dependency checking, and installs them automatically. After that go a long with the fluxion wizard instructions.

The Social-Engineer Toolkit is an open-source penetration testing framework designed for Social-Engineering. SET has a number of custom attack vectors such as phishing, spear-phishing, malicious USB, mass mail, etc. This toolkit is a free product by Trustedsec.com. To start using SET, type in terminal “seetolkit”. 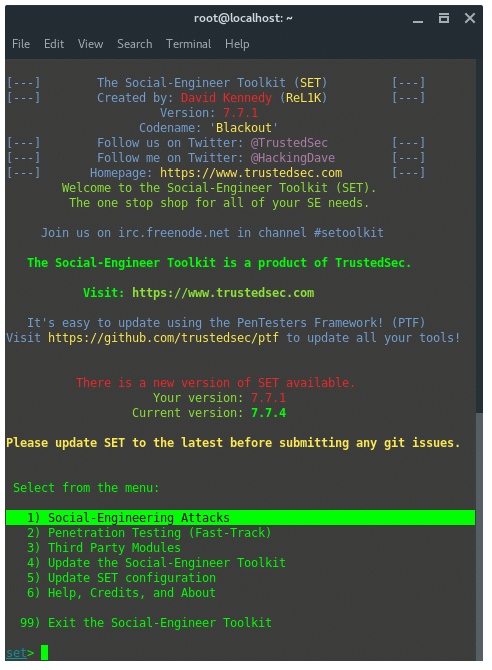 Metasploit Framework initially was intended to be a maintainable framework which automates the process of exploiting rather than manually verifying it. Metasploit is a popular framework through history, it has rich modules aimed at a variety of targets such as Unix, BSD, Apple, Windows, Android, WebServers, etc. Below, is an example usage of metasploit, exploiting Windows OS using popular NSA Exploit EternalBlue and DoublePulsar.

To run Wireshark, just type “wireshark” in the terminal. It will open up a graphical user interface. First, it will ask you to set the network interface that will be used.

BetterCAP is a powerful and portable utility to perform various types of MITM attacks against a network, manipulate HTTP, HTTPS and TCP traffic in realtime, sniff for credentials and much more. BetterCAP is similar in concept as ettercap, but, in my experience comparing both features, Bettercap WON.

Bettercap is able to defeat SSL/TLS, HSTS, HSTS Preloaded. It uses SSLstrip+ and DNS server (dns2proxy) to implement partial HSTS bypass. The SSL/TLS connections are terminated. However, the downstream connection between client and attacker does not use SSL/TLS encryption and remains decrypted.

After the command is run, bettercap will start the ARP spoofing module, DNS server, HTTP and HTTPS proxy service. And also the victim information listed.

The victim enters the url ‘fiverr.com’ in the url tab. Bettercap detected that the victim is trying to access fiverr.com. Then, bettercap SSLStrip-ing the URL by downgrade the HTTPS protocol to HTTP and modify the URL name. As the image shown below.

The URL in the victim’s browser will look like strange, it has additional ‘w’, it is how SSLSTRIP+ and HSTS Preload bypass work.

Once the victim logs in to the log in service, bettercap captures the credentials. 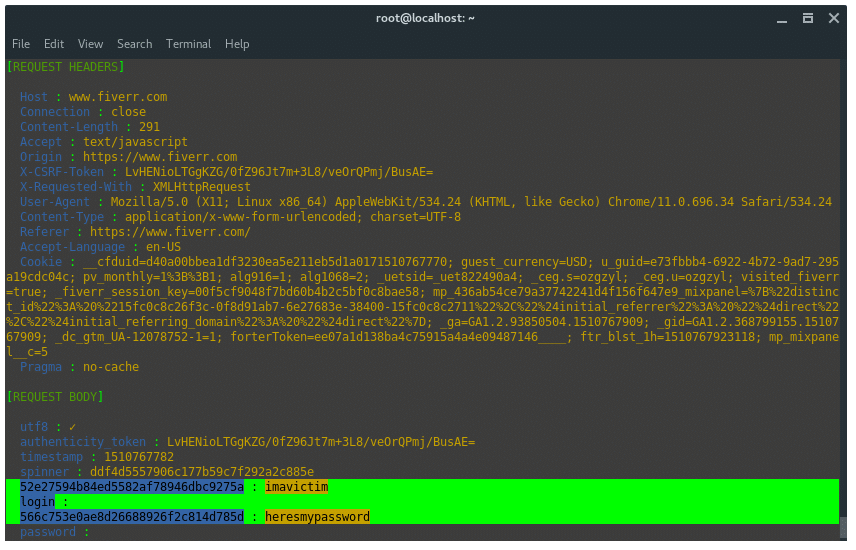 THE BEST TOOL IN KALI LINUX!

I think Metasploit Framework is THE BEST TOOL in KALI LINUX. Metasploit has a lot Modules it is:

An exploit is the method by which the attacker takes advantage of a flaw within a system, service, application etc. The attacker generally uses this to do something with the particular system/service/application which he/she is attacking which the developer/implementer never intended to do. Kind of like misusing. This is the thing which an attacker uses to gain access to a system.

Exploits are always accompanied by payloads

A payload is the piece of code which is run in the successfully exploited system. After an exploit works successfully, the framework injects the payload through the exploited vulnerability and makes it run it within the target system. Thus an attacker gets inside the system or can get data from the compromised system using the payload.

Provides additional functionality like fuzzing, scanning, recon, dos attack etc. Auxiliary scans for banners or OSes, fuzzes or does a DOS attack on the target. It doesn’t inject a payload like exploits. Means you wont be able to gain access to a system using an auxiliary

Encoders are used to obfuscate modules to avoid detection by a protection mechanism such as an antivirus or a firewall. This is widely used when we create a backdoor. The backdoor is encoded (even multiple times) and sent to the victim.

These modules are used for post-exploitation. After a system has been compromised, we can dig deeper into the system, send a backdoor or set it as a pivot to attack other systems using these modules.

METASPLOIT comes with variety of interfaces: 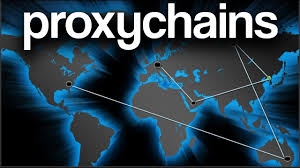